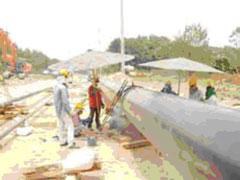 Rapid population growth, together with shrinking subsurface and ground spaces for laying utilities, has accelerated the use of trenchless techniques in India and other nations of South Asia. The deteriorating state of existing physical subsurface infrastructures has also contributed to its popularity.

In India 10 years ago, there was an awareness of Trenchless Technology, but there was little appreciation of such techniques. During the last decade, however, Indian trenchless markets have seen substantial growth in the population of drilling rigs - in fact, the number of rigs has grown from non-existence to the current total of more than 400 operating units.

Similarly, lining businesses, which started with a few metres of demonstrational applications, have evolved into businesses worth millions of dollars. A recent project completed in New Delhi boasts of CIPP lining with diameters up to 1,900 mm with an approximate length of 7 km. A substantial amount of glass-fibre reinforced pipe (GRP) linings have also been used during this period and at times it serves as a cost-effective alternative to CIPP. India is the largest market for trenchless in South Asia and is poised to grow further.

Indian subsurface infrastructure has a varied age, starting from newly laid pipes to ones that are up to 200 years old. Lengthwise, New Delhi has one of the largest subsurface pipe networks, with approximately 5,000 km. There are functional sewers in old cities such as Benaras, Kolkata or Mumbai, with pipe that is more than 100 years old.

In New Delhi the lines silted and other structural failures are rampant. In some other cities, such as Coembtore, pipes are so old that the materials have completely failed.

Apart from the above problems, another difficulty for Indian subsurface networks is the failure of proper grades for gravity lines, necessitating all-weather pumping due to sluggish flow. Infrastructure has worsened to such an extent that after an extremely long period of neglect, the utility service providers have started feeling the pinch of the failure of the networks, which are now leading to serious environmental disasters. Faced with such situations all over, several utility service providing authorities have embarked upon Environmental Improvement Projects (EIPs). Examples include the Rajasthan Urban Infrastructure Development Project (RUIDP), Tamil Nadu Urban Development Project-III (TNUDP-III), and the Kolkata Environmental Improvement Project (KEIP).

The projects indicated above are only the tip of iceberg. Such projects are needed in nearly half of India's 602 districts, and a large number of them have already commenced. The alternative to using Trenchless Technologies in these instances is utilising open-cut methods - until now, a large portion of such projects were being done by using these methods.

Application-wise, the largest need for trenchless techniques is in the water and sewer sector, where the networks are either failing badly or deteriorated to an extent where new installations are becoming necessary. There are lines where rehabilitation work can still be done, but even this work is substantial. An interesting fact to note is that although India has a large quantity of drilling rigs, microtunnelling machines are still few and far between, despite the need for them. For example, in New Delhi alone a substantial length of various diameter pipelines needs to be installed by microtunnelling and pipe jacking methods, as open-cut has been completely ruled out.

The next popular application for Trenchless Technology is in the oil and gas sector, where the networks are not as old as the water and sewer lines and are presently under development. Naturally, the new installation techniques are more applicable and some of the new, larger drilling rigs with push/pullback capabilities have started arriving in India to service these projects.

One such job under construction is at Paradeep in Orissa. With the growth of oil and gas pipeline networks, such projects are expected to increase. Although the lines for oil and gas are not that old, there are lines like the Hazira-Vijaipur-Jagdishpur Pipeline, where the need for rehabilitation is apparent. The INDSTT has been interacting with different project owners and service providers and has been promoting the application of trenchless techniques in all such projects.

The Indian trenchless market is now on the path of growth and expansion, with the project owners realising that these techniques are useful and, in certain cases, the only way to get the projects done. Global trenchless service providers need to take notice of this market, as the magnitude of projects available in the Indian market is substantial. The low wage economy that is prevalent in India presents a challenge for global stakeholders, but the opening markets have somewhat mitigated such risks.

Other positive points are India's stable currency and democratic governance systems. In addition, the presence of the INDSTT for the last eight years has lent significant support to global trenchless service providers, helping them to achieve market presence and networking. As the demand for such services is rapidly growing, there is more need for trenchless service providers and specialists than ever. One must therefore consider expanding in the Indian markets for a better future.

This news was published with kind permission of Trenchless Australasia.