Occurrences of failure in large-diameter water mains are few and far between, but when these buried pipes do fail, they fail in a big way. The consequences can be catastrophic, including prolonged service disruptions, flooding, major traffic and business disruptions, and contaminated water supplies. The cost of repair is also enormous. 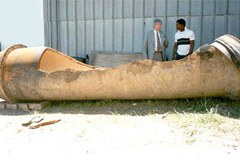 Because these events are likely to increase as buried pipes get older, researchers in NRC-IRC's Urban Infrastructure program have developed prototype computer software to help municipalities predict deterioration, evaluate the risk of failure and make decisions about repair and renewal in aging water mains. Fifty per cent of the funding for this work came from the American Water Works Association Research Foundation (AwwaRF), through which the software and the research report are now available. NRC funded the rest and nine water utilities from the U.S., Australia and Canada also provided in-kind support for this research.

One of the biggest obstacles to effectively modelling these large pipes has always been the lack of historical data about failure events. To overcome this difficulty, the software uses fuzzy logic modelling as its basis, which is well suited to the interpretation of data that involve a certain amount of subjective judgment and expert opinion, as well as scarce field data.

To use the software effectively, municipalities must perform at least one thorough inspection of the pipe, documenting all observed distress indicators. These distress indicators are interpreted into a condition rating, which is subsequently used to calibrate the deterioration model. Once the deterioration rate is established, a reasonable prediction can be made about the future condition of the pipe and about its risk of failure, determined by both the likelihood of failure and its consequences.

Municipalities then set their own level of maximum risk tolerance (MRT), compare it with the failure risk that is predicted for the pipe in the future, and obtain an idea of when this MRT is expected to be exceeded. With this information, they can make informed and rational decisions about whether or not to rehabilitate the pipe or when to schedule the next inspection.

At a workshop in December 2004, participants found the software useful for the purposes of risk management and communication with policy makers. It was recognized as a good start in helping practitioners begin a structured and rational approach to decision-making on large-diameter water mains. Based on this feedback, the researchers expect the software to provide a useful tool for municipalities throughout North America and around the world.


To obtain this report go to http://www.awwa.org/bookstore/product.cfm?id=91087


"This article was reprinted with permission from Construction Innovation Vol. 10 No. 4, December 2005"