Installation of a sewer pipe on a steep slope

Drainage for a scattered settlement in the Carnic Alps 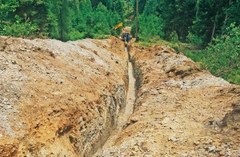 Framed by the idyllic backdrop of high mountain peaks, justifiably termed a snow haven because of the abundant snowfalls from December to April while also being blessed with an average of 850 hours of sunshine in the Winter season, making it one of the ski resorts with the most hours of sunshine in the Alps: this summarises why the Nassfeld in the Carnic Alps attracts tourists in their thousands every year.

But the Carinthia region not only draws Winter sports enthusiasts but also hikers and nature lovers in Summer. With 1.4 million overnight stays a year – and the trend is upward – it is no wonder that communities and investors in the region want to develop yet more tourist structures and/or extend existing ones.

An essential precondition if any major building projects can be achieved at all is a well-functioning water supply and wastewater disposal system. At the Nassfeld and in the Tröpolach, further projects are planned in the coming years. Wastewater from properties on the Italian side of the border region is already being handled by the Carnic region wastewater association which is responsible for the Nassfeld.

Drainage for a scattered settlement

Actually, the drainage of the scattered settlement with 25 properties at the Guggenberg is no longer part of the area of responsibility of the Carnic region wastewater association. But because of the touristic development to be expected, the lack of alternatives and the unequal distribution or increased occurrence of wastewater in specific months, it was decided to connect the outlying properties to the wastewater network of the Carnic region wastewater association. For this, a straight-line route was selected which runs over a length of 1.5 km and steep terrain with a gradient of up to 45° to the existing wastewater network.

A construction project holding many challenges, but the alternatives – individual or group sewage treatment plants – would have had an unsatisfactory result. “If no permanent, uniform feed is available, this will be complicated by individual treatment plants. The utilisation rate in the Summer and Winter months is extremely high in the Carnic region disposal area and very low in the off-season”, explains engineer Martin Enzi, managing director of the wastewater association. “As we are an area which is very much dominated by tourism, there are great fluctuations: from a basic population equivalent of 17,000 to peak-load phases of over 40,000 population equivalents when it comes to season- related levels”.

Another option would be a route for the pipeline which runs along the 4.5 km long access road which snakes its way upwards like a switchback. However, the length here was scarcely able to be financed. So, with the direct outlet, the shortest route was chosen, being only one third of the length. “The solution with thrust and tractive restrained ductile iron pipes quickly became clear, ” says engineer Walter Brieger, who was commissioned with the planning of the construction work.

The wastewater pipeline overcomes some 400 vertical metres. From 1,000 m above sea level it runs from the properties to be drained directly down to the wastewater system at about 600 m above sea level. In doing so it crosses some very different alpine zones. The requirements placed on the pipe material used were accordingly high, which is why the decision was made for robust ductile iron pipes with the VRS®-T push-in joint in nominal size DN 80 from Tiroler Rohre GmbH. These score even more points on account of the abrasion resistance of cement mortar lining, which is guaranteed even at the high flow speeds which occur on steep slopes.

A criterion of quite particular importance which had to be taken into account was resistance to external factors. So the wastewater pipeline had to withstand even potential landslides. Because of the complicated geological conditions and the special geographic and tectonic position – as the Eurasian Plate meets the African Plate in the Carnic Alps – various precautions had to be taken. 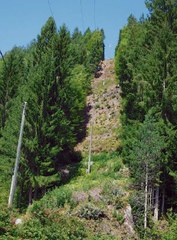 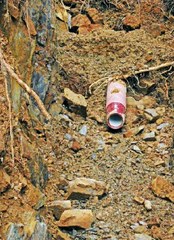 The bedding of the pipes in conventional bedding material was not possible in this steep terrain, which is why ductile iron pipes with cement mortar coating were used. The coating provides reliable protection against e.g. rockfalls during installation which could damage the pipe. Thanks to the VRS®-T restrained push-in joint, there was no need for additional thrust bearings. The constant movements of the mountains in the tectonically sensitive region make it necessary to use expansion compensation (long-sleeve sockets), developed by Tiroler Rohre GmbH – a proven method for compensating for mountain movements such as landslides. “As a particular safety measure, expansion compensators (long-sleeve sockets) have been installed to allow the pipe to expand to some extent without resulting in a pipe break”, explains Martin Enzi.

As the experience with cast iron pipes from Tiroler Rohre GmbH is consistently positive, it was decided to opt for the robust material of the traditional Austrian manufacturer throughout the challenging pipeline construction on the association’s territory. But it was not only the wastewater association who gathered experience from the construction projects implemented; the pipe manufacturers too gained some knowhow from this for further projects: “We, as pipe manufacturers, also learn from such construction projects and can apply our knowledge in other high-Alpine regions of Austria where similar conditions arise. Hence we move with the times and, based on our experiences, can drive the development of new products, such as the long-sleeve socket”, explains the sales representative from Tiroler Rohre GmbH, Dr. Igor Roblek, who looked after the wastewater association.

The greatest challenge when constructing the wastewater pipeline was without doubt the earth-moving work and the transport of the pipes on the extremely steep gradient. The installation of the pipes was only possible with a so-called “spider”. This machine, also known as a walking excavator, differs from conventional hydraulic excavators in the construction of the undercarriage. It does not have the usual wheel drive but, as its name suggest, is equipped with four walking legs. On the legs there are both wheels and outriggers. With the help of these independently controllable walking legs, it is also possible for the driver to carry out operations even in difficult terrain. But even with the equipment constructed for challenging earth-moving work, both the managing director of the wastewater association and the planning engineer had misgivings about its feasibility – despite decades of experience in the high-Alpine region, neither knew of a construction site of comparable steepness.

The starting signal was given by the equipment operator from the Porr-Seiwald consortium commissioned for the work, who was taking up the challenge with the “spider” and an additional winch securing device. So a trench was able to be excavated for the pipes in the conventional way, without the need for cost-intensive boring into the rock. The pipes were also transported with the walking excavator. “They used very experienced operators who work with excavators and can handle these pipe bundles”, says Walter Brieger approvingly. “It’s hard work, managing the transport in such terrain”.

The construction logistics also faced the clients and planning engineers with some major challenges, since the hoteliers feared falling guest numbers and dissatisfied visitors. So wherever possible the building work was pushed forward quickly in the low season. In addition, the fittings needed were delivered by Tiroler Rohre GmbH without delays. “The company structure of TRM with sales representatives in the individual Federal States and the strong regional presence of sales partners makes it possible for us to deliver the required pipes plus all the fittings needed promptly and precisely. So, for over 70 years now, we have been a reliable partner for our clients all over Austria”, says Dr. Igor Roblek from Tiroler Rohre GmbH. 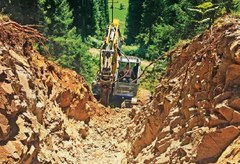 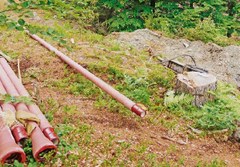 Secure operation for many decades

The work of constructing the entire 5.5 km long pipeline took a little over one year; 1.5 km of this is the length of the section of wastewater pipe described on the steep gradiant. Both Martin Enzi and Walter Brieger are relieved at the outcome of this challenging project and hope that they do not have to repeat such difficult work. Even if the rather lackadaisical motto “buried and forgotten” does not apply with the Carnic region wastewater association, it is assumed that there will be problem- free operation for many decades. For this reason, top quality pipe material is all the more important here. Luckily, ductile iron pipes promise a long working life.