Measuring the Value of Safety: How Drones Are Making Work Safer in the Sewer Industry

Sewer inspections are a crucial part of the maintenance process, helping wastewater professionals identify problems in the pipes that transport sewage before they get worse. 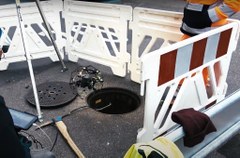 We don’t often think about the huge network of pipes that runs below ground. But when something goes wrong with one of these pipes and it ruptures, sending waste into our homes or streets, it immediately becomes the most urgent problem facing us. And that’s why the work of sewer inspectors is so important. But it’s also quite dangerous. This work can require inspectors to physically enter large sewer pipes, crawling or swimming through them while looking for potential defects. That’s right—we said swimming. As part of their work, sewer inspectors will sometimes have to don scuba gear and PPE designed to protect them from raw sewage and swim through large sewer pipes.

Granted, this kind of entry into an active sewer pipe is less common and typically only used in emergencies. More commonly, inspectors will take a pipe offline for an inspection, emptying it through a process called bypass pumping until the pipe is dry and safe for them to enter. Here are the most common hazards sewer inspectors face in their work: 7The presence of noxious gases, like Hydrogen Sulfide (H₂S)

Of all these hazards, confined space entry may be the worst according to the Bureau of Labor Statistics, a total of 1,030 people died in the US between 2011 to 2018 due to occupational injuries involving confined spaces. In some instances, work in confined spaces is combined with the dangers of working at height, because inspectors have to stand on temporary structures like scaffolding, or use ropes to repel or climb so that they can see every part of the area they’re inspecting. How Drones Make Sewer Inspections Safer Drones eliminate all of the hazards listed above for inspectors because they eliminate the need for inspectors to enter sewer pipes at all. An indoor drone like the Elios 2 can fly into a sewer pipe and collect all the visual data the inspector needs, allowing the inspector to stand safely outside the pipe, monitoring the drone’s progress on their live feed.

Because of its small size and its special collision tolerance features, the Elios 2 can fit through a standard manhole and inside many types of sewer pipes, allowing it to operate in several scenarios where wastewater inspections are performed. “We’ve investigated several UAS solutions for sewer inspections, and we’ve found that only the Elios 2 can fly reliably in these conditions,” said John Delp, DCS North America Chief Unmanned Aircraft System (UAS) Pilot at AECOM. Last year, AECOM partnered with wastewater utility WSSC to test the Elios 2 for inspecting a huge, 102-inch diameter Reinforced Concrete Pipe known as the Anacostia Trunk Sewer (ATS) in the suburbs of Washington, D.C.

AECOM is one of the largest global engineering firms, with about 55,000 employees providing infrastructure consulting services across all sectors, including water and wastewater utilities such as WSSC. WSSC has to inspect any pipe it oversees that’s 15 inches in diameter or larger at least once every five years. If a pipe is considered “high risk” because it’s among the largest and most critical in the sewer system, it must be inspected even more often. The ATS falls into this category, since it is the largest pipe in the WSSC wastewater conveyance system. Every day, the ATS has an average dry weather flow of 45 million gallons, carrying about a third of all of WSSC’s wastewater.

The test was the first time a drone had been used to inspect a sewer system in that part of the US, and it was a success. Despite water flowing through the pipe at a rate of 26-feet per second and the degradation of several access points due to corrosion, inspectors were able to collect all the visual data they needed to perform their inspection.

The Future of Drones in Sewer Inspections

Using drones for sewer inspections is still a fairly new concept. But tests like these are driving adoption throughout the industry, making the inspection process safer, faster, and more efficient. Currently, the alternatives that sewer inspectors have when trying to avoid entering a sewer system to collect inspection data are fairly limited. Inspectors can place a CCTV camera on a raft inside of a pipe, but this approach presents limitations to the data they can collect because they can’t control where the camera points as it floats on the water.

Inspectors can also use large, multi-sensor robotics solutions to collect data inside pipes, but these systems are often too big and too expensive to be a reliable, commonplace option for their needs. Indoor drones, on the other hand, can fly in many environments where sewer inspectors would otherwise have to go. And they can serve as a reliable means for collecting inspection data due to their high-quality inspection cameras, allowing inspectors to gather all the visual data they need remotely, without having to endanger themselves.

As drone technology continues to develop, we’re sure to see not only wider adoption among sewer inspectors, but also an increase in the capabilities of drones for wastewater applications. SLAM (simultaneous localization and mapping) is an example of a new technology that has the potential to significantly improve sewer inspections conducted by drone—and also increase safety in these operations.